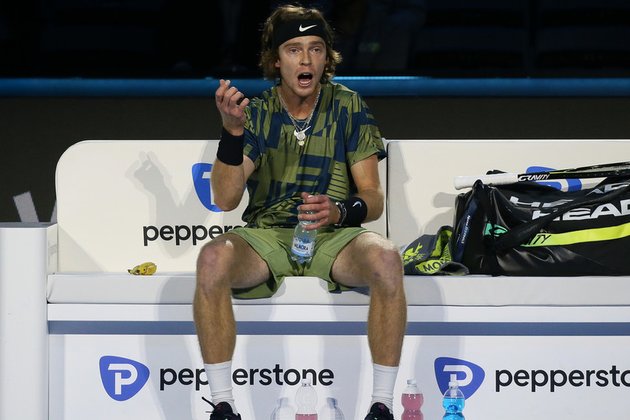 Andrey Rublev's hopes of winning a maiden ATP Finals title are over after he suffered a 6-2 6-4 defeat to Casper Ruud in their semifinal in Turin on Saturday.

Rublev, 25, had sealed his place in the last four at the Pala Alpitour arena with two wins from three group-stage matches - including a dazzling comeback against Stefanos Tsitsipas on Friday - but was unable to repeat the trick against a ruthless Ruud.

The Norwegian world number four produced a powerful performance against his rival, winning the contest in 69 minutes.

Ranked number seven in the world, Rublev had enjoyed a 4-1 record in head-to-head meetings with Ruud before Saturday's match.

It will be the 23-year-old Norwegian who faces Novak Djokovic in Sunday's title match in Turin.

While Ruud is aiming for a first triumph at the season-ending event, Djokovic is targeting a sixth title at the ATP Finals - which would equal Roger Federer's record.

Should he win on Sunday, the Serb will also collect around $4.75 million in prize money as an unbeaten champion, having won all three of his round-robin matches before beating Taylor Fritz in straight sets in their semifinal on Saturday.