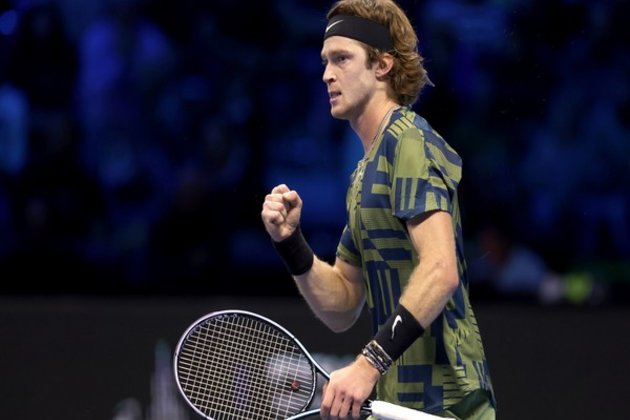 Turin [Italy], November 19 (ANI): Russian tennis player Andrey Rublev fired his forehand to stage an amazing comeback after being a set down to clinch a win over Greek's Stefanos Tsitsipas on Saturday to reach the semifinal of the ongoing ATP Finals being held at Turin.

The sixth seed clinched a 3-6, 6-3, 6-2 win over the Greek to set up a clash with Casper Ruud in semifinals. Though Rublev was one set down, his groundstrokes helped him clinch his 51st tour-level win of the season.

Tsitsipas made a brilliant start and broke through in fourth game on Rublev's serve. His one-handed backhand was impressive against heavy-hitting strokes of his opponent. The break proved to be enough for the Greek to win the first set.

Rublev continued to use his forehand to overpower Tsitsipas and his efforts paid off in the eighth game of second set after which there was no looking back for the Russian. His ability to fire winners off the wings turned to be crucial in third set, which he won.

"I did not give up. I kept fighting and playing. I lost my emotions a bit when I lost a stupid game at 40/0 in the first set. I let my emotions go. But then I just kept fighting and playing and you will have chances. I thought I would have chances if I just gave my best. I managed to turn the match around and I am happy to be in the semis," Rublev was quoted as saying by ATP.

After losing two previous matches with the Greek this year, Rublev, who clinched trophies in The Marseille, Dubai, Belgrade and Gijon, showed immense resillience to hit 36 winners to seal the match after one hour, 42 minutes.

The 25-year-old Rublev. who could not progress beyond group stage at his previous two appearances at the event, now has a chance at the trophy if he does well in semis.

"I am really looking forward to the match because Casper is such a nice person on and off the court," Rublev said. "He is a great player, great fighter. He has achieved so many good things this season, so it is going to be a really good challenge for me. I hope I will do my best and I will see what happens," he added. (ANI)