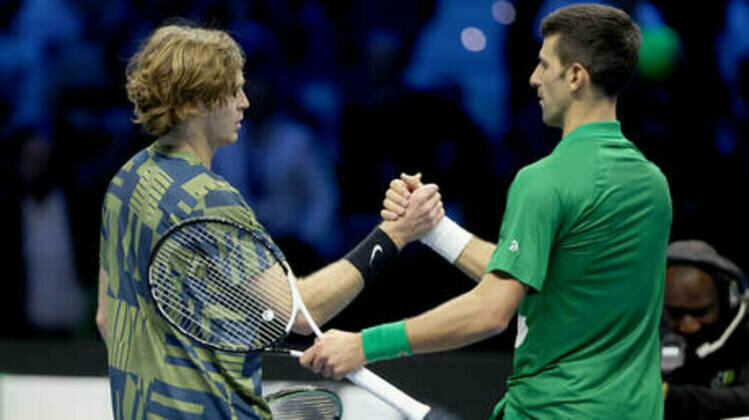 Five-time winner Novak Djokovic guaranteed his place in the last four of the ATP Finals after an impressive win against Russian rival Andrey Rublev in their round-robin match on Wednesday.

Having beaten Stefanos Tsitsipas in his opening match of the season-ending tournament in Turin on Monday, Djokovic recorded another straight-sets victory with a 6-4 6-1 win against Rublev in a contest lasting 68 minutes.

Djokovic finished strongly against an opponent who had won his opening match against compatriot Daniil Medvedev in a titanic three-set tussle earlier in the week.

"I played very, very well. One of the best matches of the year without a doubt," Djokovic said after improving his head-to-head record against Rublev to 2-1.

"He's a tough opponent. A great competitor. He possesses a lot of strengths in his game. I managed to find the right attitude and the right game."

Rublev failed to manufacture a single break point against Djokovic on the hard courts of the Pala Alpitour, while the Serb converted three of the four break opportunities he earned.

The first set appeared tight before Djokovic made the breakthrough in game ten, while the second set was more straightforward as the 21-time Grand Slam winner exerted his dominance.

Djokovic, 35, has won the prestigious ATP Finals five times previously - but the last of those titles came back in 2015.

The Serb is chasing Roger Federer's overall record of six wins at the tournament, which this year moved to Italy after more than a decade in London.

Meanwhile, the 25-year-old Rublev is still aiming to reach the semifinals in Turin, which would be a first appearance in the knockout stages of the ATP Finals at the third attempt.

Rublev plays Greek rival Tsitsipas in their final 'Red Group' round-robin match on Friday, when the already-qualified Djokovic will take on Russia's Medvedev.

Tsitsipas and Medvedev will attempt to keep their tournament hopes alive when they meet later on Wednesday.

In the four-man 'Green Group' in Turin, Norway's Casper Ruud assured his place in the semifinals with victory over Taylor Fritz of the USA on Tuesday - a result which meant Rafael Nadal will definitely exit the tournament.

Fritz and Canada's Felix Auger-Aliassime will contest the other spot in the semifinals when they play each other on Thursday.