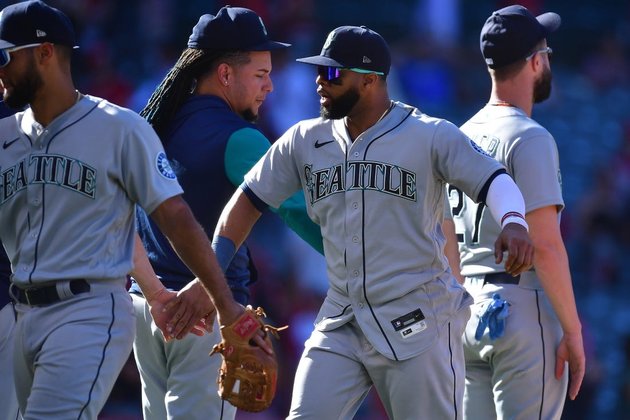 The Seattle Mariners get an opportunity to move up the American League wild-card standings when they open a three-game road series against the last-place Oakland Athletics on Tuesday night.

Coming off a 9-1 road win over the Los Angeles Angels on Monday that ended a three-game skid, the Mariners(81-65) now embark on far-and-away baseball's easiest remaining schedule, one in which they will see the A's (53-94) six times in the next 13 days.

Seattle will enter the final 16 games in third place in the wild-card race, with a comfortable edge over the Baltimore Orioles and Chicago White Sox for the AL's last playoff spot.

So, the Mariners' attention now turns to moving up the ladder, which, should they reach the No. 1 wild-card position, would mean having home-field advantage in the first round of the AL playoffs.

Seattle hopes to enjoy scoreboard watching over the next three days, during which the top two teams in the wild-card race -- the Toronto Blue Jays and Tampa Bay Rays -- have tougher tasks, as the Jays visit the Philadelphia Phillies, while the Rays host the Houston Astros.

Other than playing the A's six times, the Mariners will finish with three games against the Kansas City Royals, three against the Texas Rangers and four against the Detroit Tigers. The cumulative winning percentage of those teams -- including Oakland -- is a major-league-low .391.

Carlos Santana and Ty France combined for three homers and nine RBIs in Monday's shellacking of the Angels. The Mariners had totaled just nine runs in the first three games of the series, which included a pair of one-run losses.

If Seattle is to continue in a positive direction, it will have to do it at the expense of A's left-hander JP Sears (5-2, 3.90 ERA), who won a head-to-head with his counterpart, righty Luis Castillo (7-5, 2.68), last month in Seattle. In a 5-3 win, Sears limited the Mariners to one run in five innings in his first appearance against Seattle.

The rookie has been bombed for 11 runs and 15 hits in just six innings between his last two starts against the Chicago White Sox and Rangers.

Sears might avoid Mariners star Julio Rodriguez, who missed the final three games of the Angels series with a sore lower back. He likely will return at some point in Oakland.

"I just feel like a few days' rest is going to be the best thing for it," he noted Sunday. "It's better to be cautious with it."

Castillo was roughed up by the A's for four runs and eight hits in five innings in the earlier meeting, his only career outing against Oakland.

One guy Castillo will be seeing for the first time Tuesday is rookie first baseman Jordan Diaz, who got a hit -- a single -- in his major league debut for the A's in Houston on Sunday.

A's manager Mark Kotsay looks forward to seeing what Diaz and his young teammates can do against teams like the Mariners moving forward.

"This team has competed all year. We fight," he boasted. "We're playing some good baseball teams right now that are going to be in the postseason. It's a test, and we are going to continue to grind."