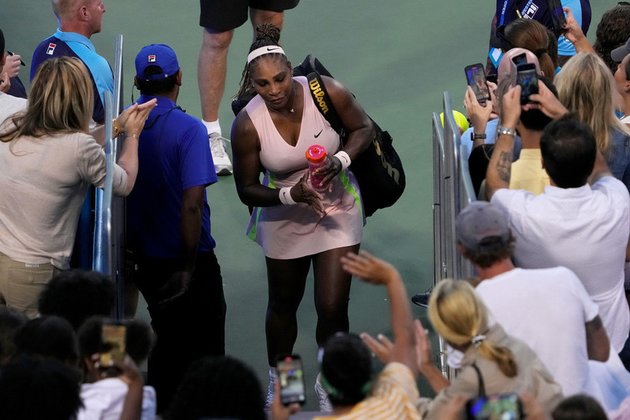 Serena Williams appeared to decline an on-court interview as the American great suffered another bruising defeat ahead of her imminent retirement, going down in straight sets to defending US Open champion Emma Raducanu in their first-round meeting the Cincinnati Masters on Tuesday.

Raducanu wasted little time seeing off the 23-time Grand Slam singles champion, running away with a 6-4 6-0 victory in 65 minutes against Williams, who revealed last week that the upcoming US Open would be her swansong.

But unlike her previous appearance at the Canadian Open, where she gave an emotional interview in front of fans following a second-round defeat to Belinda Bencic, Williams was described as avoiding attempts to interview her on court in Ohio.

"Serena 0-2 since announcing her retirement. Emcee tried to stop her for an on-court interview for the crowd, but Serena blew past," wrote tennis journalist Ben Rothenberg.

Instead, the 40-year-old icon congratulated Raducanu at the net and headed straight off court with her bags while waving to the cheering crowd - leaving the Brit to express her thoughts on facing an all-time great of the game.

"I think we all need to just honor Serena and her amazing career," said Raducanu.

"I'm so grateful for the experience of being able to play her and for our careers to have crossed over and everything that she has achieved is so inspirational. It was a true honor to share the court with her."

Currently coached by Russian Dmitry Tursunov, Raducanu marches on to a second-round meeting in Cincinnati with Victoria Azarenka of Belarus.

The 19-year-old British star is aiming to gain momentum ahead of her US Open title defense at the end of August, having stunned the world with her triumph in New York last year after emerging through qualifying.

Unless she can find some old magic, Williams will be left to contemplate a subdued end to a career which has brought a staggering 73 singles titles, four Olympic gold medals, and a total of 319 weeks spent as world number one.