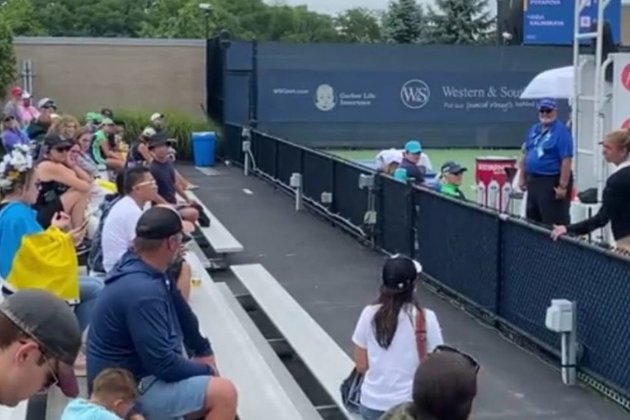 A female tennis fan with a large Ukrainian flag wrapped around her body was asked to leave the stands during a match between Russia's Anna Kalinskaya and Anastasia Potapova during qualifying for the Cincinnati Masters at the weekend, footage has shown.

The Russian duo were in action on Sunday at the hard court WTA tournament, also known as the Western and Southern Open, with Kalinskaya winning the match 7-5 6-1 against her compatriot to earn passage to the main draw of the prestigious American event.

But proceedings were disrupted at one stage as a woman with a large Ukrainian flag and wearing a Ukrainian-style floral wreath around her head was asked to leave the stands.

Tennis journalist Ben Rothenberg said the woman was a local resident named Lola who had been watching the action "silently" and was with a Ukrainian friend.

Umpire Morgane Lara was seen talking to the fan and was quoted as saying it was "not nice" to sit with the flag, to which the woman replied it was "not nice to invade a country."

According to Rothenberg, the intervention had come at the request of one of the players and security staff had behaved "aggressively" towards the fan.

However, tournament organizers later clarified to Reuters that the flag had breached the rules because of its size.

"Per the Western and Southern Open's bag policy, as stated on the tournament's website, flags or banners larger than 18 x 18 [inches] (46 x 46cm) are prohibited," a spokesperson told the news agency.

"Therefore, the patron was asked to remove the flag from the grounds and, after doing so, was allowed to remain at the tournament.

"Any inquiries about the chair umpire should be directed to the WTA Tour," it added.

Despite widespread bans across other sports, Russian and Belarusian players are allowed to compete on the WTA and ATP tennis tours under neutral status.

After tournament officials at Wimbledon went against the grain and banned them from the grass court showpiece earlier this summer, the ATP and WTA responded by stripping the London Grand Slam of its rankings points in retaliation.