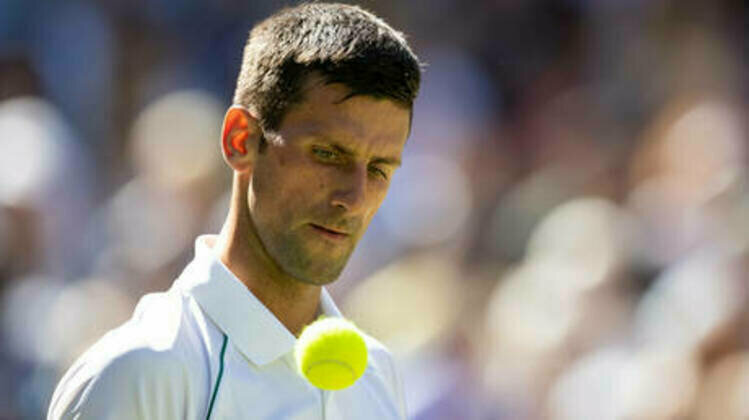 John McEnroe doubled down on his criticism of the US authorities

The continued Covid-19 restrictions which will prevent the unvaccinated Novak Djokovic from appearing at the US Open later this month are "BS," according to American tennis icon John McEnroe.

The American CDC relaxed its Covid-19 guidelines last week but an entry ban into the country for unvaccinated non-citizens such as Djokovic remains.

The Serb has already been forced to miss two events of the North American hard court tour series after pulling out of the Canadian Open last week and this week's Cincinnati Masters.

Now the 35-year-old appears almost certain to be absent again when the action in New York gets underway on August 29.

"Well, first of all, I think it's BS. That's what I think," McEnroe told Fox News Digital as he criticized the situation.

"I think he should be allowed to play. My personal opinion, as I've been vaccinated, I had a booster shot, that's up to the individual.

"If I were him, and I'm not him, he's won a lot more majors than me probably because he's dug in his heels and found that gear, that will, that very few people in any sport have ever found, so that's part of what's made him so great, he sticks to his guns.

"He's perfectly entitled to make the decision," added the 63-year-old, who himself won four of his seven Grand Slam singles titles at the US Open.

"The guy is one of the greatest athletes in any sport. He's very careful about anything he puts in his body," McEnroe added.

"So, it's frustrating to see at this point... that he's not allowed into the country right now because he's not vaccinated.

"It's really unfortunate but that's the rules we really have right now with the government. I don't agree with it but 'c'est la vie' at the moment."

The comments echo what McEnroe said following Djokovic's Wimbledon win in July, when the American veteran called the situation "ridiculous" and accused politicians of "getting in the way too much."

Djokovic was also forced to miss the Australian Open at the start of the year when he was deported from the country in a row over his vaccine status.

The 21-time Grand Slam winner reiterated after his Wimbledon win that he was not willing to get jabbed against Covid-19, even if it meant passing up the chance to claim more titles.

Djokovic is a three-time winner of the US Open and was beaten in last year's final by Russia's Daniil Medvedev. The Serb is just one Grand Slam away from Rafael Nadal's all-time record haul of 22.

READ MORE: Djokovic clings to US entry hopes after Biden told to intervene

Both Nadal and defending champion Medvedev are set to line up at Flushing Meadows and are also playing Cincinnati this week.

Djokovic has earned support over his plight from peers such as US player Tennys Sandgren, who has accused American tennis officials of "shameful" behavior for not making more effort to gain an exemption for Djokovic.

The Serbian community in the US has also directly urged President Joe Biden to intervene and allow Djokovic into the country.

Djokovic has said in recent social media messages that he is grateful for the support, and that he will continue to train fully for the US Open, should he be granted some late good news.